Results from the Library Carpentry survey

What routines do librarians and other information professionals adopt after a Carpentries training, and what other benefits and impacts does this have on their professional life? These questions were the starting point of a survey developed by the Library Carpentry Advisory Group, LCAG in 2021. We reached out to the wider library community with the aim to gain a better understanding of impacts resulting from training, learn more about their engagement with the Carpentries community and to collect their ideas and wishes for current and future training topics. The survey consisted of 28 questions overall and was open for responses between June and August 2021. We disseminated the survey through various channels, including The Carpentries mailing lists and social media channels, regional mailing lists (e.g. Australia, Asia, Africa) as well as direct contacts to former workshop participants and instructors (via host institutions). Overall, 113 responses were received. Not surprisingly, the majority of respondents are based at universities. Further respondents work in public libraries, special libraries or research organizations. Over two thirds (79 respondents) reported that their library already engages with The Carpentries, and several do so in multiple ways. In addition, 19 respondents work at libraries that are not involved yet but they would like to learn more about The Carpentries. Reported job roles (cf. Figure 1, multiple choice) are strongly related to teaching and learning (45.4%), research support roles (research data management 32.4%, scholarly communication 28.7%), and reference and user services more generally (31.5%). Moreover, several respondents manage collections, digital library services, research and development projects and information and data analytics. 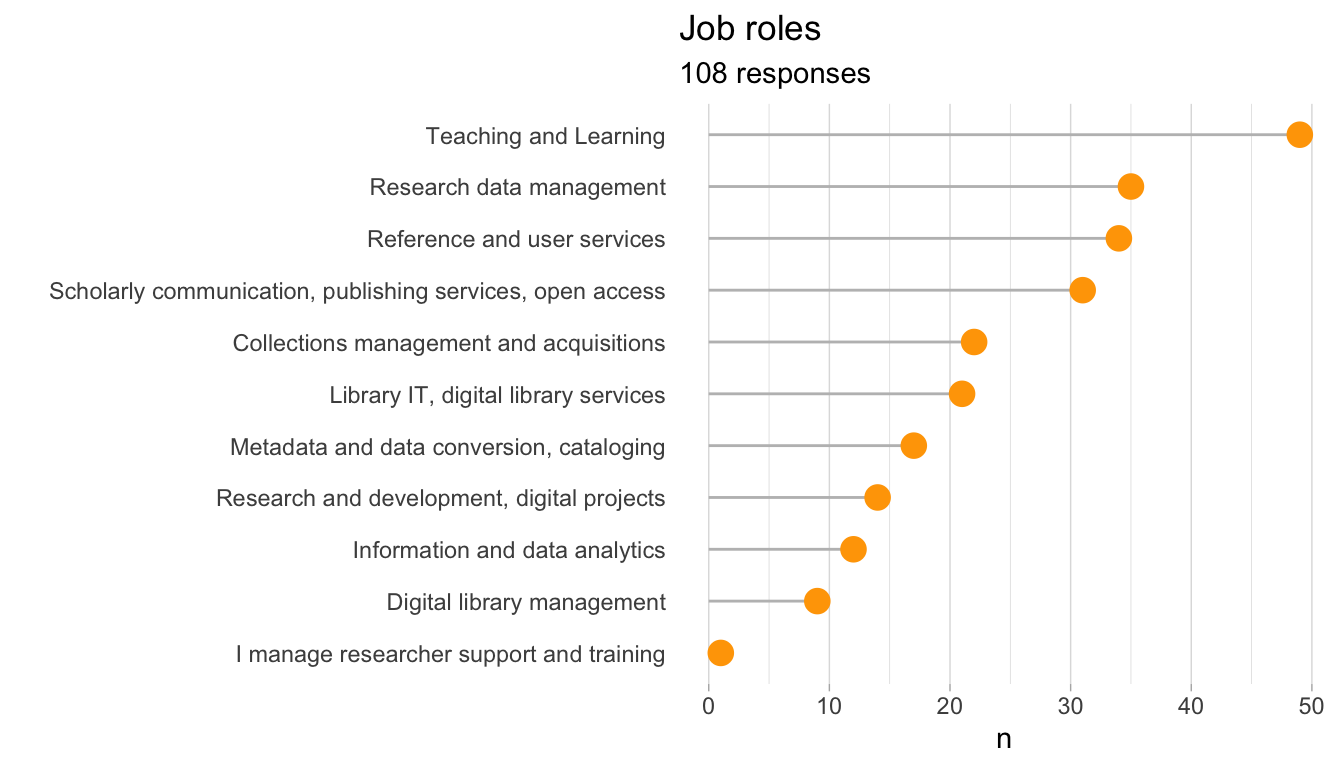 Figure 1. Job roles of respondents to the survey

Out of all respondents, 85 had attended at least one Carpentries workshop, 18 did not attend one yet but 7 planned to do so in the future. Most popular (cf. Figure 2) were Library Carpentry (73), followed by Software (42) and Data Carpentry (38), with good degrees of overlap (45 already attended at least two workshops). 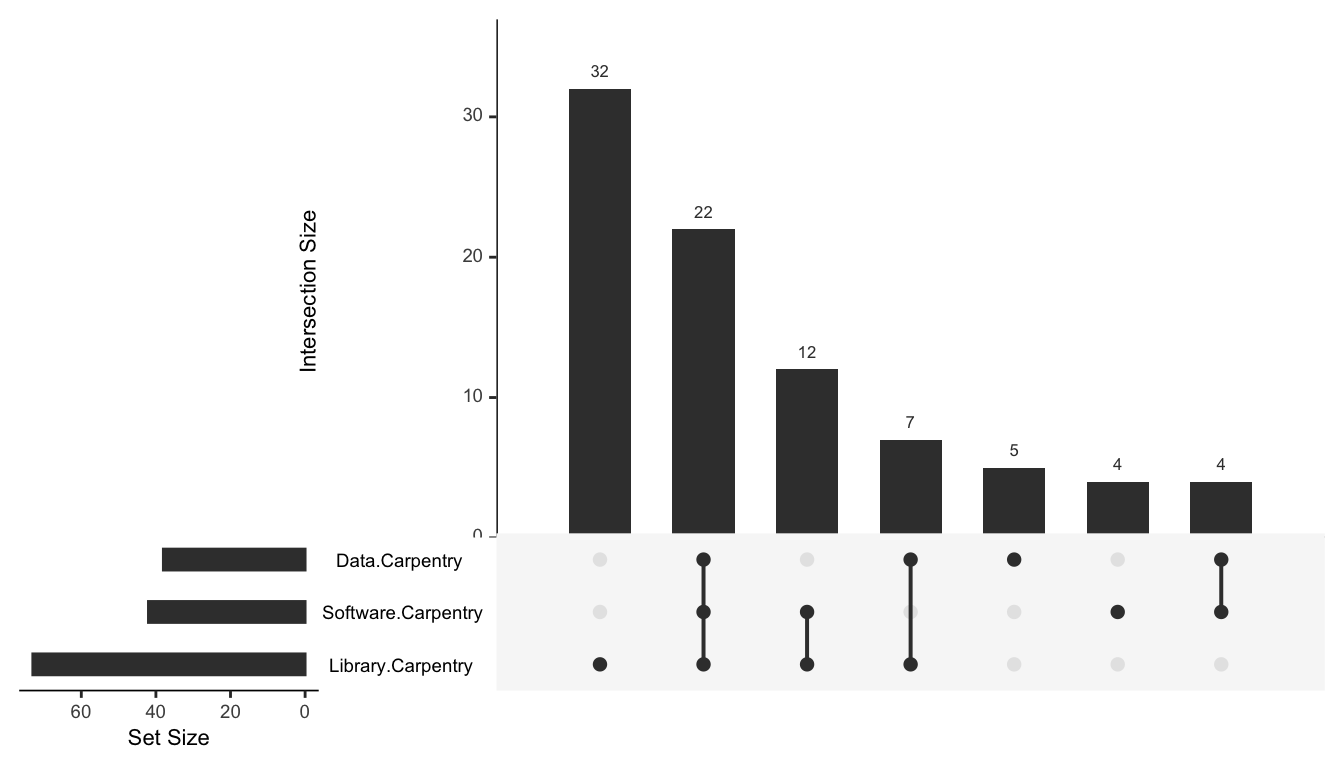 Respondents with experiences in Carpentries workshops were asked to assess to what degree they have adopted certain behaviours or routines as a result of having completed a Carpentries workshop. The scale of responses was a 7-point Likert scale between never (0), sometimes (3, mid-point) and regularly (6), not all levels were spelled out in the survey questionnaire. The additional levels can be read as very rarely (1), rarely (2), often (4) and very often (5).

Figure 3. Routines and behaviours adopted after attending a Carpentries workshop

About every second respondent reported improved data management and project organisation (48% often to regular), and adopted a new routine related to re-organising and cleaning spreadsheets (46%). Version control (33%), reusing code (28%) as well as using programming languages (25%) have been adopted as well. Least popular were transforming workflows into scripts, creating processable reports and scaping and mining web content. The latter might also be due to the fact that these topics are less often offered in workshops.

Figure 4. Benefits reported from participation in a Carpentries workshop

Other behaviors that were reported through free text comments include the adoption of training methodologies from The Carpentries (e.g. didactics, live coding) and an increased awareness of the good data practices (e.g. reproducibility, tidy data). Additional follow-ups included recommendations to others to attend the workshops (over 3 out of 4 respondents), and to join The Carpentries as an instructor or helper. Many participants continue learning, in particular about two thirds used Carpentries self-guided material and about every second respondent contributed to a workshop as a helper or instructor.

The most common topics of workshops were version control via Git, OpenRefine and the Unix shell which were attended by about every second respondent. Suggestions for other topics that should be added to the Library Carpentry curriculum included data literacy and data management (e.g. FAIR data, data curation, data ethics), databases (e.g. SQL), bibliometrics, metadata analytics (e.g. via Python or MarcEdit), data visualization (e.g. dashboards), advanced version control, processable reports (e.g. R Markdown) and specific data collection (e.g. web scraping) and data analysis techniques (e.g. machine learning, text mining). Some of these topics are already targeted by lessons under development in the Carpentries Incubator. Moreover, some respondents suggested that lessons should provide more examples and that some of the lesson plans should be updated.

Professional benefits also played out in the final comments provided by respondents: these ranged from improved teaching skills (e.g. “[…] a fast-track to teaching digital skills, even without a teaching background”, “[…] have learned how to run an inclusive training and create training focusing on the practical side of learning”), higher confidence in expanding technical skills and in communication with technical staff and researchers (e.g. “Learning skills from The Carpentries was a threshold concept for me - it blew my perceptions of research wide open and allowed me to talk with researchers and technical staff as equals.”), up to transformations in libraries (e.g. “The Carpentries has been transformative in my institution, and I’m sure others. It is so important to make staff and researchers aware of open source tools and how to use them effectively.”, “The Carpentries supports my skill development to allow me to be an agile employee that can face the challenges of a changing workplace with confidence.”).

The survey results support the beliefs of the Library Carpentry Advisory Group that The Carpentries provides an effective learning environment. Library Carpentry enables participants to benefit personally, improving their individual skills and communication with teams in a wider professional environment. Furthermore, it encourages learners to influence how libraries engage with data in a responsible and resilient manner across the education and public service sectors. The lesson programs can only continue to support such achievements as long as they are maintained and developed by the volunteer community. The survey showed that the core lessons are, on the whole, meeting the needs of most learners, however, there is an opportunity to improve and add to the curriculum in a few areas such as data curation, ethics, bibliometrics and analysis. More examples could be written which provide better or more relevant context to learners, and some of the lesson plans need to be updated to remain relevant and accurate. Any help from budding content creators would go a long way, so please look up lesson repositories and contact the maintainers if you would like to get involved. We suggest that the findings of this survey are visited again by the Library Carpentry Curriculum Advisory Committee at their next meeting to help them prioritise next steps.

Github repository with survey data and code: https://github.com/gitti1/LC_survey and https://gitti1.github.io/LC_survey/