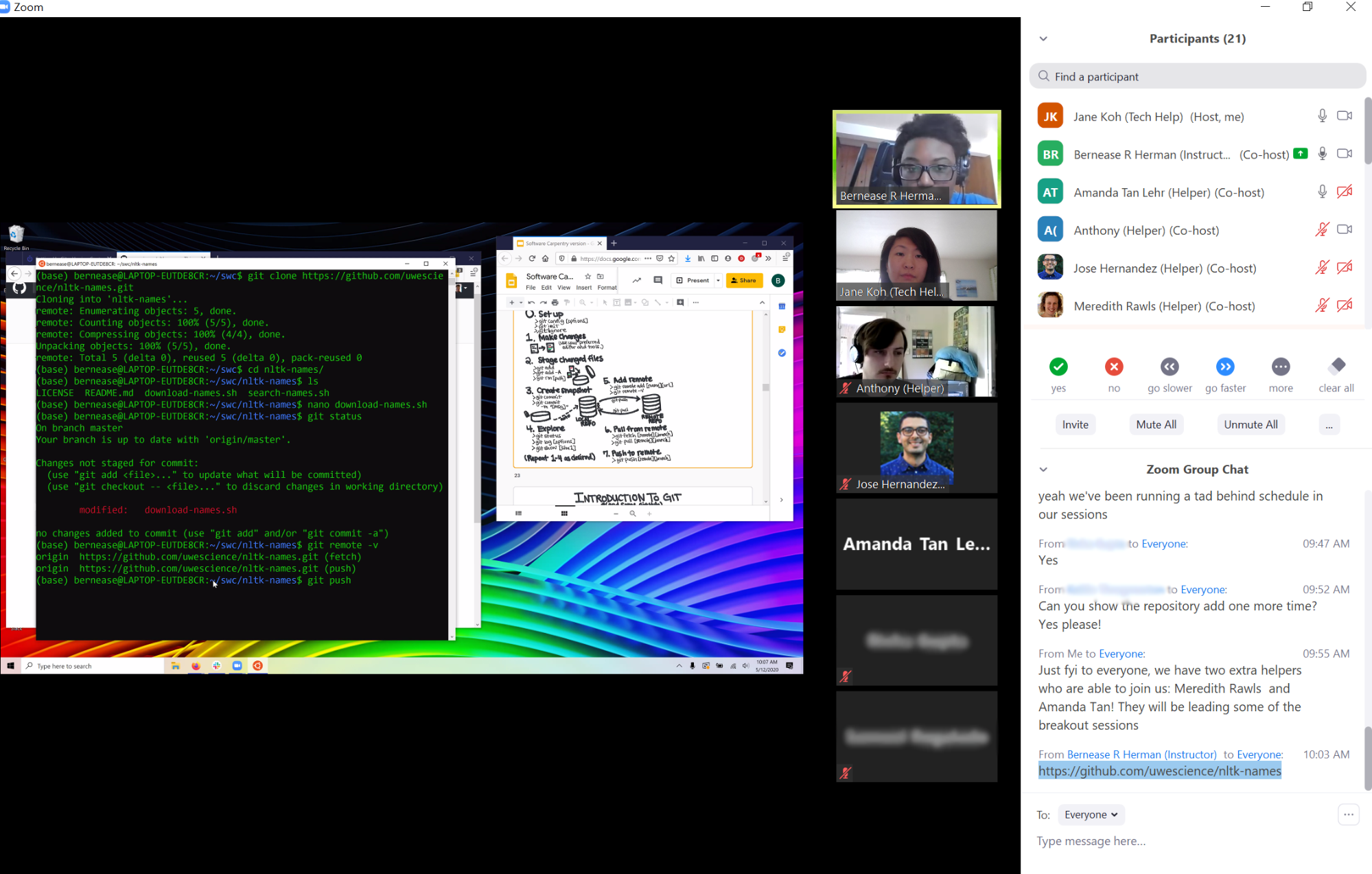 Amid the COVID-19 pandemic, a team of Data and Research Scientists at the University of Washington eScience Institute and the Department of Astronomy were able to hash out and test the logistics of running a four-day Software Carpentry Workshop with 20 participants using only Zoom and slack. The following is an outline of what worked for our group with added context.

Participants were emailed beforehand to follow the instructions in the setup section of the workshop website for installing all Git, Bash, a text editor and Python components. Additionally, we provided these instructions to make sure their installation for git and bash worked:

We also invited the participants to join the zoom meeting 30 minutes prior to the start of the first day if they needed installation assistance.

Communication amongst organizers and with participants:

On The Carpentries Slack workspace, we set up a channel that served as a place for all organizers to communicate before, during, and after workshops. The instructors shared their breakout exercises before their workshop for helpers to familiarize themselves with ahead of time. The helpers also asked questions in the channel if they were confused about anything themselves. As a coordinator of operations, I used the slack channel to share feedback from participants and other insights each day to quickly implement changes needed in how we structured our workshop for the next day.

There was a debate over what we should use to have participants ask questions. At the end of the day, the majority of organizers didn’t want to add in another component such as hackMD/etherpad/google doc or make the participants download and familiarize themselves with slack. Although it would’ve been great to have threading in our messages with participants (which Zoom doesn’t provide), we also deemed this level of organization and a record of all questions weren’t needed.

Thus, we used zoom chat to communicate with participants during the tutorials and encouraged participants to plop in any questions they had. However, there was a slight issue on the first day as participants asked a lot more questions than anticipated, which resulted in frustrations from other participants who indicated through our anonymous feedback form that they found it distracting having the instructor stop and start often to address questions. We also fell behind schedule and didn’t get through the whole tutorial. Thus, we quickly changed our approach the next day in having all questions during the tutorial directed to the 2-3 helpers online that day. I split up the roster by the number of helpers and said each morning, “If the first letter of your name starts with _ through_, your helper today is ___. Please find them now in your chat and send them a quick hello.” This ended up solving the issue and also provided participants with more one-on-one help while lowering interruptions for the instructor and the class.

But also, stay flexible as tutorial leads can have different teaching styles. Our Python II instructor expressed that she actually preferred to receive questions while she was teaching. In particular, conceptual sorts of questions. So we found a happy medium in still splitting up the class and designating participants to specific helpers, but also letting them know that if they had any conceptual questions, the instructor preferred those to be directed to her in the chat. This worked out great as the instructor wasn’t bombarded with every type of question, but the sort of why? questions she did receive enhanced her lesson and added a sense of engagement.

Also, offer a simple and anonymous feedback form (we used google forms) to participants at the end of each day through which they can leave any comments/concerns. The feedback we received at the end of each tutorial was useful in implementing any needed changes. We only got positive feedback the final day which went by unsurprisingly the smoothest.

Reading and engaging a zoom audience

With an audience of blackened screens for the majority of the time, it was another challenge finding ways to read the room. Here are three key things that helped:

Try to maintain no more than a 1:5 helper-participant ratio for breakout groups. For our entire workshop, we had helpers automatically placed into breakout groups to lead the exercises. However, this ended up not being ideal as it was counterintuitive in the goal of participants applying what they’ve learned and solving the exercises independently with added peer learning. So next time, we plan to split the breakouts into groups no larger than 5 participants with the helpers (co-hosts) staying outside in the main room until people press the “Ask for help” button. At that point, the host will assign an available helper into the breakout room so they can go in. Note that only main hosts can see when someone presses the “Ask for help” button.

To help break the ice, the participants should also be provided the guidelines of enabling their cameras and starting each meeting out briefly going around introducing themselves in popcorn fashion. Participants will need to have the exercises shared with them before they go into their groups. So plan on having google doc links to the exercises ready to share in the chat beforehand.

Our breakouts were each 15 minutes long and consisted of a couple exercises. Not all groups got through all the exercises, but most helpers still agreed that having 1-2, 15-minute exercises per tutorial felt just about right. Participants also left positive feedback in our anonymous forms that they found the breakouts helpful, especially on days we had more helpers so that we could split the groups up even smaller.

One thing to be aware of with Zoom is that there can only be one main host while there can be an unlimited number of co-hosts. As we discovered during a technical test and run through session (which we strongly recommend your team does prior to the workshop as well), the host and co-host have different controls. The main host is also the only one who can create and end breakout groups and move freely in and out of any of them. Meanwhile, co-hosts can only move in and out of the breakout rooms they’ve been assigned to.

Try to appoint the main host role to someone on your team who isn’t an instructor or helper. That way, they can focus on the technical details of Zoom and have breakout rooms sorted and ready to go. Here’s a list of tasks this role would have:

Zoom quirks to be aware of: