This post was first published on Software Sustainability Institute’s blog. 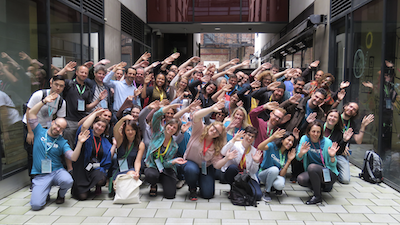 CarpentryConnect Manchester 2019 took place from 25th to 27th June 2019. For the first two days, we were in a fantastic, modern, vibrant meeting venue – The Studio – at the very heart of Manchester. On the third day, we moved to the University of Manchester’s School of Computer Science, so attendees had an opportunity to see the Oxford Road/North campus after refurbishment too. We’ll publish a detailed CarpentryConnect Manchester 2019 report, but, in the meantime, here are some highlights from the event.

We had 75 participants from nine countries (UK, Belgium, the Netherlands, Norway, Oslo, Germany, Italy, the US and Australia), ran 27 training and discussion workshops, and hosted 12 lightning talks and four posters.

The organising committee kicked the conference off the night before with a dinner at Bundobust, Indian street food & craft beer restaurant, with some people who arrived early. 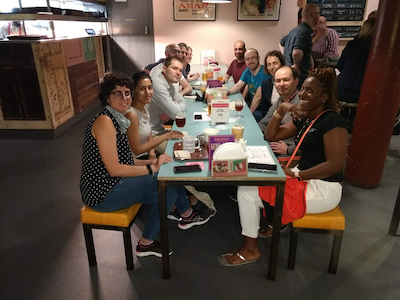 On the first day, we had two keynote speakers. Tracy Teal, the Executive Director of The Carpentries started us off with the importance of building confidence in people and the importance of our instructors who do that – knowledgeable, enthusiastic and comfortable bunch. She also presented stats on the Carpentries work – a huge amount of it is taking place around the world, with workshops happening on all seven continents! 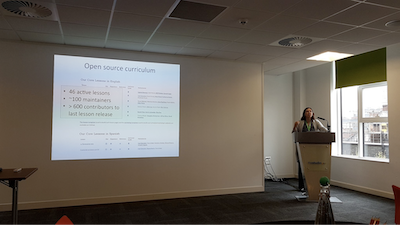 Mine Çetinkaya-Rundel, our second keynote speaker, is a data scientist, an RStudio educator and a recent addition to the School of Mathematics at the University of Edinburgh where she moved from the Department of Statistical Science at Duke University. In her talk, Mine spoke about goal-oriented backward design of curricula – showing students the end result first to motivate and give direction. 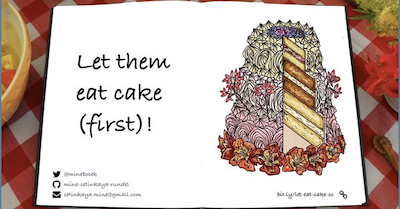 We then had an excellent ice-breaker session, led by Malvika Sharan and Tania Allard, where delegates were grouped by numbers on playing cards they each picked out from a deck at registration. All delegates with the same number joined the same group (we had a list of topics we wanted them to discuss); they could swap cards later to join a different group.

The ice-breaker was followed by a set of 12 lightning talks, which were live-streamed on Twitter. In the afternoon, we broke out into several parallel sessions, where attendees had a chance to either be trained in curriculum development Carpentry-style, rapid and reusable learning design, creating publication-ready scientific reports using Jupyter notebooks, statistical methods using R and Python, advanced Unix Shell, work on “Community Carpentry”, or discuss ways to improve diversity in our communities and how to build a local Carpentry community.

The afternoon walk around Northern Quarter was very popular among the attendees with 22 people joining Niall Beard on a mural & graffitti trail. 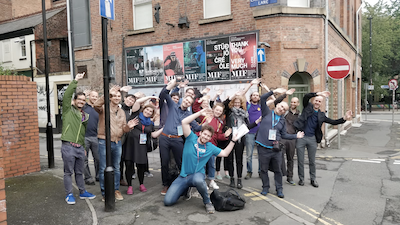 We got back to The Studio for a BBQ-style dinner, but the Manchester weather did not hold so we were seated inside instead of on the lovely terrace. This did not dampen the spirits as we had a magician to entertain us and an illustrator/doodler Lauren Beard to draw our avatars. And we had a dog – yes, a dog! 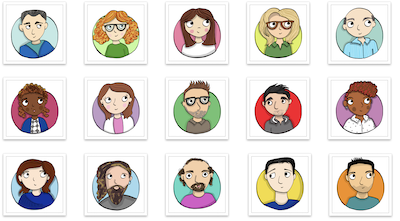 The second day was organised in a similar way – keynotes in the morning, followed by a poster session and parallel sessions in the afternoon. The day started with an address by Prof. Colette Fagan, Vice-President for Research at the University of Manchester. After that, in his keynote talk Lex Nederbragt took us through all the lessons from the Carpentries’ instructor training and how to apply them in our daily work lives. Most important ones seem to be - “control your mailbox”, “learn to say no”, and “before you can help the others you need to be looking after yourself”. Our final keynote speaker Marta Teperek taught us in her talk that data stewards are akin to doctors but for data (and sometimes software) problems and how to help researchers with small, realistic, incremental steps for improving their data management practices.

In the afternoon, we had parallel sessions on building connections between local communities and forming regional training hubs, dos and don’ts for computational training, using git and GitHub to build training materials, learnt how to boost our research reproducibility using Binder, how to do advanced technical writing, approaches for hands-on distance learning and all about Open Source Software best practices and FAIR principles, and had a mini Library Carpentry community get-together.

We finished the day with a walking tour of Manchester city centre’s famous buildings sights, led again by Niall Beard, and a dinner at the Indian Tiffin Room. 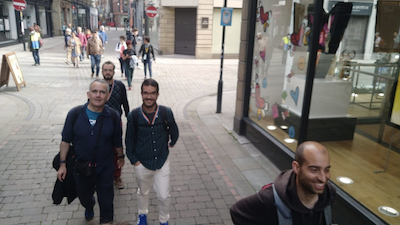 Day 3 programme was full of training workshops (interactive maps in Jupyter notebooks, Submitty, an open source tool to automate marking), reprohacks (to reproduce various scientific results reported in literature), curriculum development workshops (machine learning and AI, digital humanities, biology: R for transcriptomics analysis and alternatives to Bash Shell for Windows users) and a breakout session on open science for decision makers. We finished the day slightly earlier than previous days to allow people to travel back home or to their next destination.

We tried to raise awareness and reduce the environmental impact during the conference. Anna Krystalli and Anne Foilloux won the Reusable Lanyards Raffle. Thanks to our attendees who brought reusable cups and bottles, we made a huge impact avoiding disposable and plastic cups. 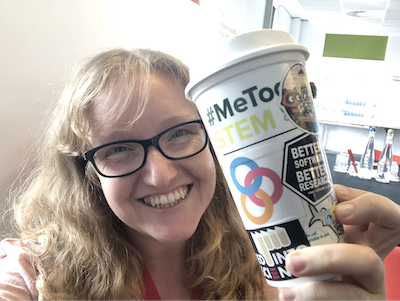 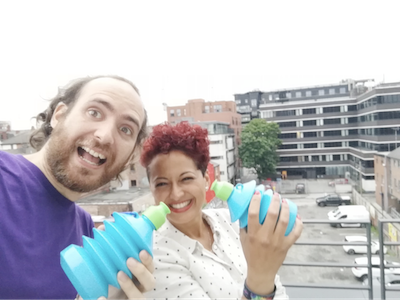 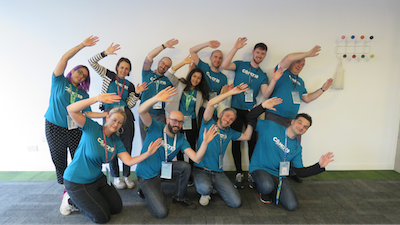 And thanks to the impressive audience at #CCMcr19 too – till we meet again!