Building the local South African Carpentries community through a CarpentryConnect.

During the first week of September 2018, CarpentryConnect Johannesburg was run in South Africa.

Although we initially dreamt of running an open event (similar to CarpentryCon in Dublin) we had to weigh up the benefits of opening the event up with the risks of not being able to attract enough people due to the associated costs. Over the past few years we’ve realised that getting institutions to invest (pay registration fees and cover travel costs) in something they have never heard about, is quite hard. Especially at a time when travel budgets are cut and embargoes are being placed on travel (most notably for university support staff).

The good news was that the Rural Campuses Connection Project II (RCCPII) and the South African Centre for Digital Language Resources (SADiLaR) had been supporting Carpentries workshops in South Africa for a few years already. These two projects gave the go-ahead to fund CarpentryConnect Johannesburg 2018 as long as the respective project aims were reached through the event. Based on the funders’ target audiences, the event was thus open to staff and students affiliated with public universities in South Africa. RCCPII is funded through the Department of Higher Education and Training, administered through Universities South Africa and implemented by the Tertiary Research and Education Network. SADiLaR is one of the South African Research Infrastructure Roadmap projects funded through the Department of Science and Technology.

RCCPII was able to support CarpentryConnect event costs as well as accommodation for participants from a subset of universities in South Africa, while SADiLaR was able to cover participation and accommodation for people interested to participate in the Library/Digital Humanities Carpentry workshop. We invited Deputy Vice Chancellors (DVCs) and in some cases Library Directors from the 26 public universities in South Africa to nominate a limited number of staff and/or students to participate in the event with the aim of bringing the training and resources back to the home institutions. Institutions were also asked to fund travel costs (fuel/car rental/flight ticket only) for nominees to travel to Johannesburg. Some universities wanted to send more people than what could be covered by the funding and in those cases they were willing to fund travel and accommodation costs.

The aim was to create awareness of The Carpentries training model, resources and community amongst more senior academics, librarians, and IT staff.

The five-day event kicked off with three Carpentry workshops running in parallel:

The workshops ran over two and a half days. After lunch on day three we offered three parallel sessions:

In general, feedback throughout CarpentryConnect JHB, and afterwards, was very positive. The five-day event had a total of 108 (47% female) participants including 85 learners and 23 instructors and helpers. 24 out of the 26 public universities in South Africa were represented as well as a representative from the South African National Libraries and two private companies. 39 trainees also participated in the in-person instructor training.

The audience was a wonderful mix of academics, librarians, IT staff, and research office personnel as can be seen in the figure below. Participants were asked to select their discipline according to the outline of academic disciplines available in Wikipedia. In our graph “IT” represents both IT as a support division and IT as an academic department based on how people completed their registration forms. 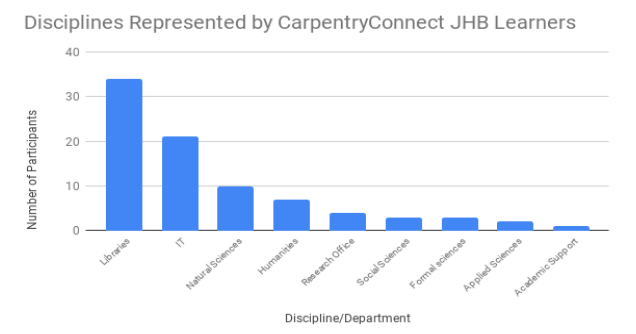 There was a lot of interest in bringing The Carpentries to participants’ home institutions at the end of the week. In October 2018 we did a roadshow in follow-up to CarpentryConnect to universities in the Eastern Cape and KwaZulu Natal. To date The Carpentries had been under-represented in these provinces of South Africa, except for the growing community based at the University of KwaZulu Natal. Based on CarpentryConnect and the roadshow, six new workshops were confirmed at various universities with two additional workshops in the pipeline including another round of instructor training.

Thanks to everyone who made this event possible and for all the work that’s been done since CarpentryConnect JHB to bring workshops to new institutions!